Corsica has so much to offer visitors, whether you wish to relax or sightsee, whatever the weather, Corsica has it all!

Corsica has a selection of towns and places of interest to visit, that illustrate the diversity and charm of the island. These include towns and villages and examples of the places that are worth a visit purely because of their natural beauty. Also included are examples of vineyards across the island as Corsica boasts 9 AOC regions.

A Genoese citadel which is home to the foreign legion museum and the remains of Christopher Columbus’ birthplace and forts Mozello & Charlet which were seized by the English during siege of Calvi in 1794. The Quai Landry has bars, cafés and ‘gin palace’ yachts.

Founded by Pascal Paoli, the main, plane tree-lined Place Paoli has numerous cafés and bars, with shops and restaurants nearby.

Within the UNESCO World Heritage Site, the 700km2 nature reserve of Scandola with its red cliffs and abundance of wildlife, and the charming small fishing village of Girolata are only accessible by boat or a very long walk.

Ruined Roman baths on the supposed initial landing point on the island by the Romans.

The Cathédrale du Nebbio (now the Church of Santa Maria Assunta), a small Genoese citadel, an array of quayside restaurants and the nearest marina to the Côte d'Azur attracting some amazing boats.

The administrative town of Haute-Corse, the lively town has its own citadel and old port together with an abundance of shops and restaurants.

A small village clinging to the cliffside on the west coast of Cap Corse, peering down over a black beach - accessible by 600 steps!

Remains of the Roman settlement, once the capital of the island.

Departmental museum cataloguing the history of south Corsica back to 8,000 BC, including the original remains of 'La Dame de Bonifacio' plus many artefacts from the Neolithic and Bronze ages.

The main pleasure port on the south east coast overlooked by the old town, it is known as the 'City of Salt' due to its disused but still visible salt-evaporation basins.

Bonifacio is famous for its chalk cliffs with the old town at the top and the 187 steps of ‘escalier Roi d’Aragon’ leading from the old town down to the sea, marina Quai Comparetti and marina with boat trips to the Maddalena islands.

Home to the Bonaparte Museum & Salon Napoléonien in the Town Hall, Ajaccio has a Genoese citadel & the Aquaduct de Miletto.

The unusually square Genoese watchtower at the mouth of the river from which boat trips to Scandola depart and the only Aquarium on the island.

'The most Corsican of Corsican towns' constructed entirely of ashlar granite making it strangely simultaneously beautiful yet austere.

Breath taking views of the Porto river as it threads its way through precipitous ravines in the chestnut-forested hills leading up to Evisa.

The enchanting village of Piana with amazing views across the gulf of Port is just a few minutes' drive from the Calanches - towering steeples of red granite gnarled into amazing forms by wind and rain.

The legendary rock outcrop resembling the silhouette of a resting lion looking out over the sea towards Sardinia.

A Genoese citadel with the official Museum of Corsica tracing the islands anthropological history, Place Gaffory with its bullet-riddled walls and the Restonica & Tavignano valleys for a picnic.

Recently rediscovered Pisan Frescos, in the church of San Nicolao.

Pascale Paoli Museum at his birthplace.

The hamlet is at the base of a very walkable stretch of the GR20 along which there is a route to the Cascade des Anglais rapids & waterfalls.

For over 2,000 years, many civilisations including the Justinian's, Byzantines, Moors, Lombard's and Saracens, amongst others, had all fought for ownership of this little island, giving it a history almost too great for the size of its boundaries. Due to its natural beauty, mountainous interior and strategic position on the western Mediterranean trade routes, Corsica had long been favoured for its commercial value and sheltered harbours. 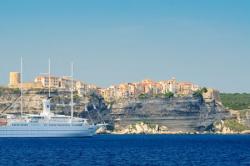 The Greeks founded the island's first major colony at Aléria (then called Alalia) in 565BC, come 259BC it was the Romans who invaded the island and were ruling by 115BC, Corsica would remain under Roman rule for more than 500 years.

Under various Roman rulers including Julius Caesar, Hadrian, Caracalla and Diocletian, Aléria was considerably developed along with Mantinum (Bastia), Urcinium (Cargèse), Aiacium (Ajaccio), and Marianum (Bonifacio) and in the 3rd century AD Christianity was introduced across the island. 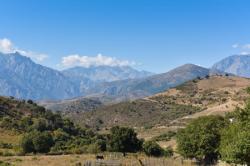 By 455AD the Vandals had taken Corsica from Rome leaving a trail of destruction behind (hence the term 'vandal' with its modern definition). They ruled until 534AD when the Byzantines succeeded in driving them to North Africa. However, the Byzantine Empire could do little to protect Corsica from the Ostrogoths and Lombard's, who annexed the island in 725AD and come the 9th century, Corsica found itself under the control of the Moors, a nomadic people of the northern shores of Africa chiefly of Berber and Arab descent. The Moors not only retained power for 166 years but lent their name to a number of Corsican area and place names, particularly the interior areas and mountains. 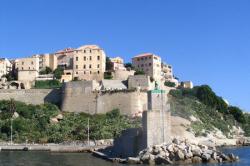 The early 11th century saw the Moors retreat due to pressure from an allied force of Pisans and Genoese, which saw the Pisans granted control of the island in 1077. The Pisans and the Genoese are believed to have had the greatest impact upon Corsican architecture and language, building chapels and churches, such as the churches of San Michele di Murato, and De La Trinité in Aregno with its iconic multi-colour stonework.

Following their defeat of the Pisans by the Genoese in 1284, Corsica and Sardinia were handed to the kingdom of Aragon in 1297. During the height of the Genoese ownership of the island, the great explorer Christopher Columbus was born in Calvi Citadel in 1436 - although Ligurian Italians will dispute this!

Despite the first French intervention in 1553, the Genoese regained control of the island after just 3 years and held it until 1729 when a revolt of the general population was witnessed due to high taxes. 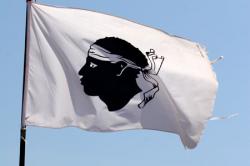 In 1731, the National Constitution of Corsica was signed in Corte. It was in 1755 that Pascal Paoli lead the rebellion and declared Corsican independence but was later evicted from the island by the French in 1769. It was Paoli who adopted the Moors head as the symbol for the traditional Corsican flag, but moving the bandana, once covering the eyes, upwards so that the eyes were uncovered, symbolising the liberation of the Corsican people.

On 9th May 1769 Corsica was finally wrested from short control of the Corsicans and into the hands of the French King Louis XV. Pascale Paoli escaped to England where he spent 20 years in exile before returning to the island in 1789 having been pardoned. However, due to his links with Britain, he was aided by the navy of George III in the attempt by the Corsicans to re-seize control of the island from the French which saw numerous battle sites across the island during which Horatio (later Admiral Lord Nelson) lost his eye. The English held Corsica until the end of 1796 when it was handed back to the French. Shortly after Paoli's defeat, Napoleon Bonaparte (who was born in Ajaccio in 1769) succeeded in his coup d'etat on 9 November 1799, re-introducing a Corsican in control of the island. However, the Corsican people felt betrayed, given their continued simmering despise for the French and Bonaparte's apparent treachery and that ill-feeling is still palpable even now!

Following the occupation of France by the German Wehrmacht in 1940, Corsica was controlled by the Vichy French regime which was in collaboration with the Nazis. The island was liberated in 1943 and shortly thereafter became the host to 17 US air force bases from which numerous attacks on German-occupied Italy were initiated - which earned the island the nickname 'USS Corsica'.

Military presence on the island has remained in the form of the 2nd Parachute Regiment of the Foreign Legion, based at Camp Raffalli Barracks just to the east of Calvi.

Despite strong desires by the vociferous minority Corsicans to secure independence from the French, the island remains a region of France although it still features numerous distinct differences from the mainland in terms of its landscape, culture, customs and language, making it a truly unique part of the world.

Corsica boasts 9 AOC wine regions, below are examples of vineyards across the island.

Call Me Back
We will call you back >